To begin, let’s get acquainted with the layouts of both iterations of norns – standard and shield:

After norns powers up, it will launch the last script that was loaded. On a fresh norns, this will be awake, a set of looping sequencers with delay.

While you are inside of the playable interface, the encoders and keys perform script-specific actions.

Once you are in the menu interface, use E1 to switch between the different menus (LEVELS, TAPE, HOME, PARAMETERS). We’ll explore each of these menus in the rest of the docs! 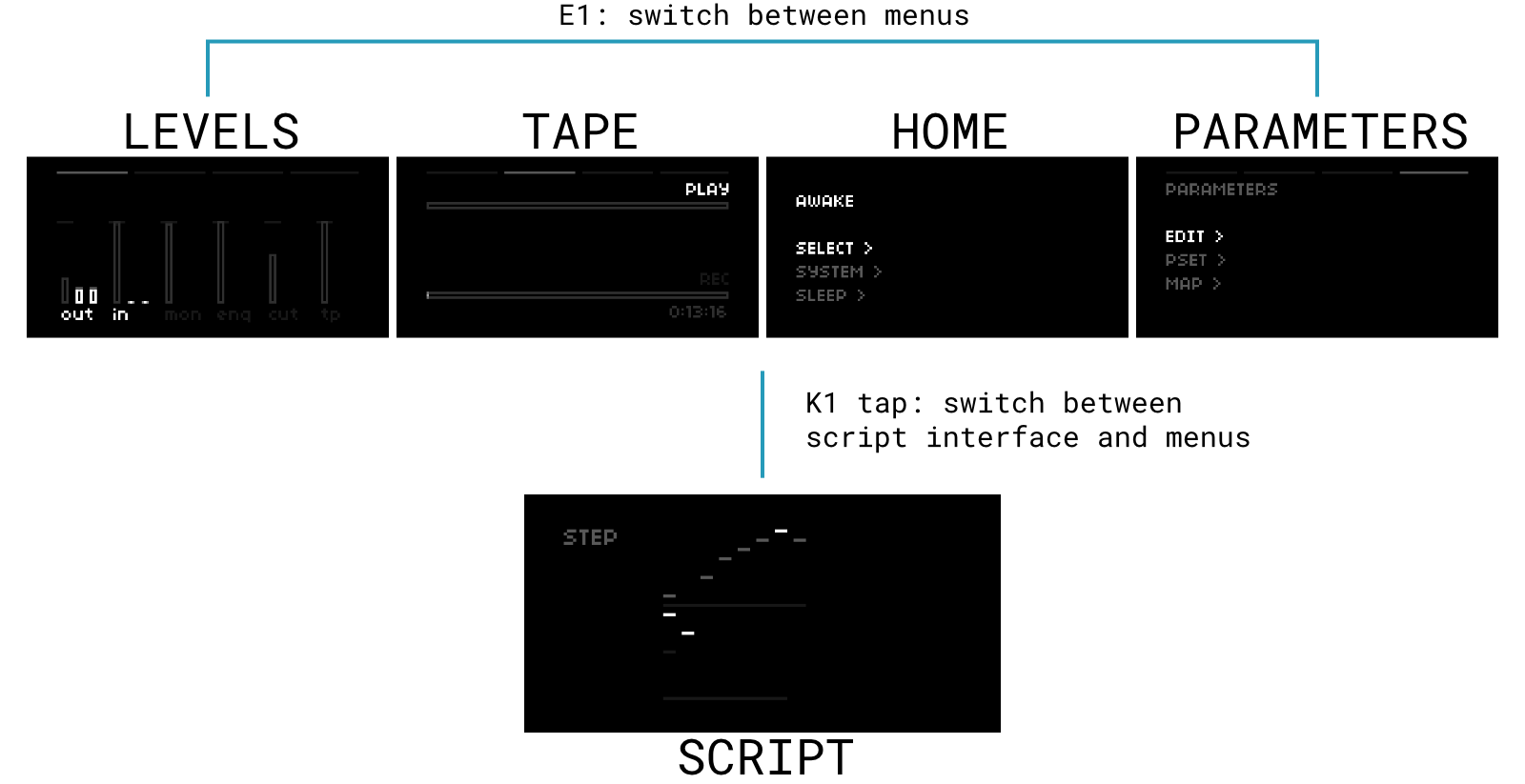 As you navigate these documents, you’ll encounter a few key phrases which have specific meaning in the norns ecosystem. To help ease the cognitive load, here’s some of the core terminology:

Before we dive into exploring the system menus, lets play with the script that loaded when you turned on your norns and has been happily generating music as you read.

Here’s a quick guide to each of the modes in awake, which E1 switches between:

awake uses the PolyPerc SuperCollider engine to generate the synth tones. awake also uses softcut configured as a monophonic half-second delay. Both PolyPerc and softcut have a number of useful parameters to change the sound of what’s playing.

Try plugging in a grid and you’ll gain a playable physical interface to manage the sequencer’s steps.

Most norns scripts rely on these types of interactions — re-definable encoders, two-button presses in the form of hold-one-press-the-other, turning an encoder while a modifier button is held, etc.

DO NOT plug modular-level signals into norns (neither standard or shield) – norns is designed for line levels only.

To begin our menu dive, let’s adjust the audio levels.

Tap K1 to come up from the script layer to the menus layer and turn E1 counter-clockwise until you see pairs of vertical sliders.

The horizontal notch represents unity. All levels can go to +6dB.

The PARAMETERS menu is where you’ll find helpful system controls as well as performance-centric settings for each script.

Use E1 to navigate to PARAMETERS, and enter the EDIT menu with K3.

At the top of this menu are controls for each component of the global audio chain.

LEVELS
controls output, input, monitoring, engine, softcut and tape levels
REVERB
adjusts the system reverb and send levels for the currently loaded engine, softcut, monitor, and tape
COMPRESSOR
adjusts the system compressor, which is the final stage of the audio processing
SOFTCUT
adjusts the output and send levels for the six-voice system sampler
CLOCK
reveals controls for the norns global clock. The clock can be synced to a number of sources, including MIDI, Ableton Link, and crow. We'll dig into specifics about clock later, but it's good to know about!

Scrolling down further, we find some of the script’s parameters. These are chosen by the script’s author and can be adjusted by using E3.

To recall and build on the changes you’ve made in a future session, we can save a script’s parameter state as a PSET (preset). 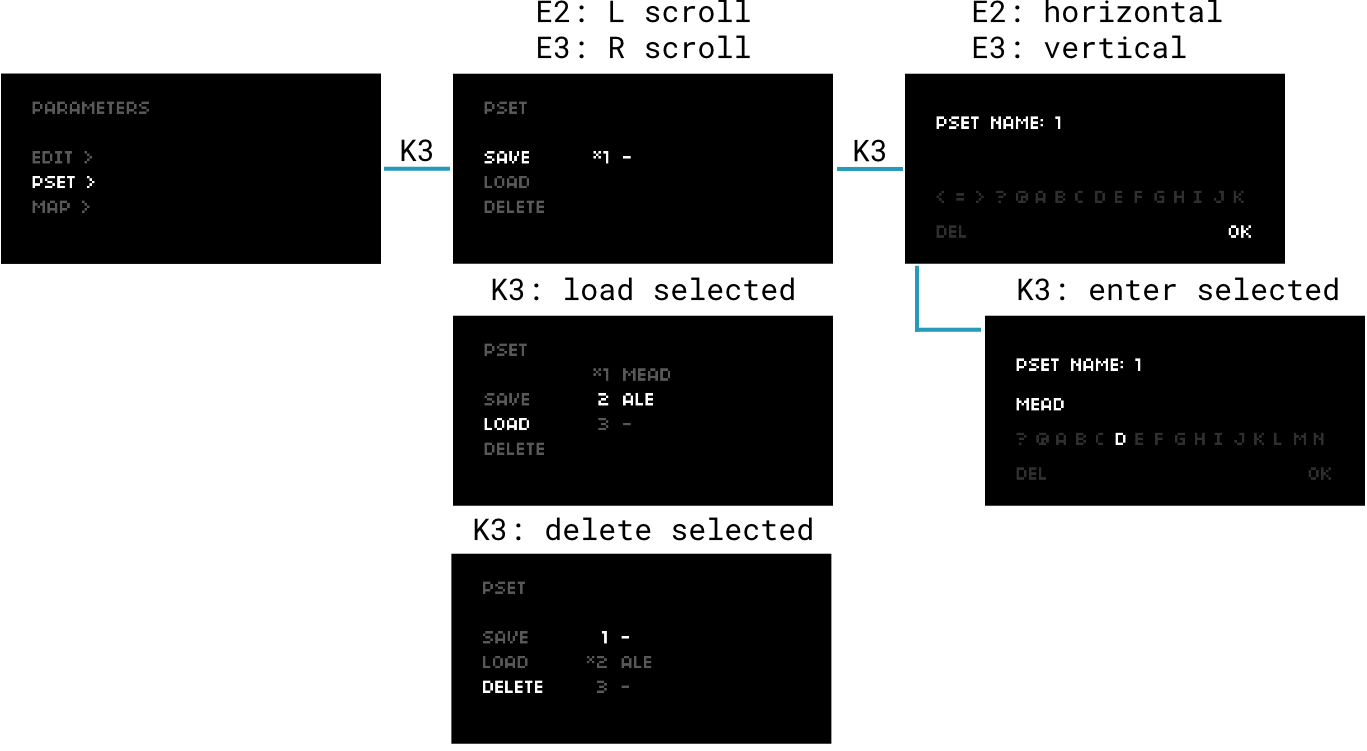 norns has a built-in mechanism to play audio files underneath a script as well as record system audio, so you don’t need connect a separate recording device to capture your creations.

These changing melodies are lovely, but they’re a bit removed from the natural world. Let’s load a field recording of hermits to loop underneath.

Jump to the menus interface and use E1 to navigate to the tape screen.

PLAY expects 48khz files (both stereo and mono supported). WAV, AIFF, FLAC and other uncompressed header / sample formats supported by libsndfile will all work (including RAW).

As of this writing, sounds always loop and there are no additional transport controls.

This all sounds pretty nice – perhaps you’d like to record it?

On the tape screen, press K2 to switch between the PLAY and REC lanes.

what gets recorded exactly?

In the simplest terms, everything you hear from the main output is committed to a recording tape. This includes the system reverb, compressor, monitor audio, as well as any tape that might be playing. If you are recording for further processing in a DAW, you may want to turn off the system reverb and compressor for a more barebones sound.

Tap K1 and navigate to the home menu, then press K3 on SELECT: 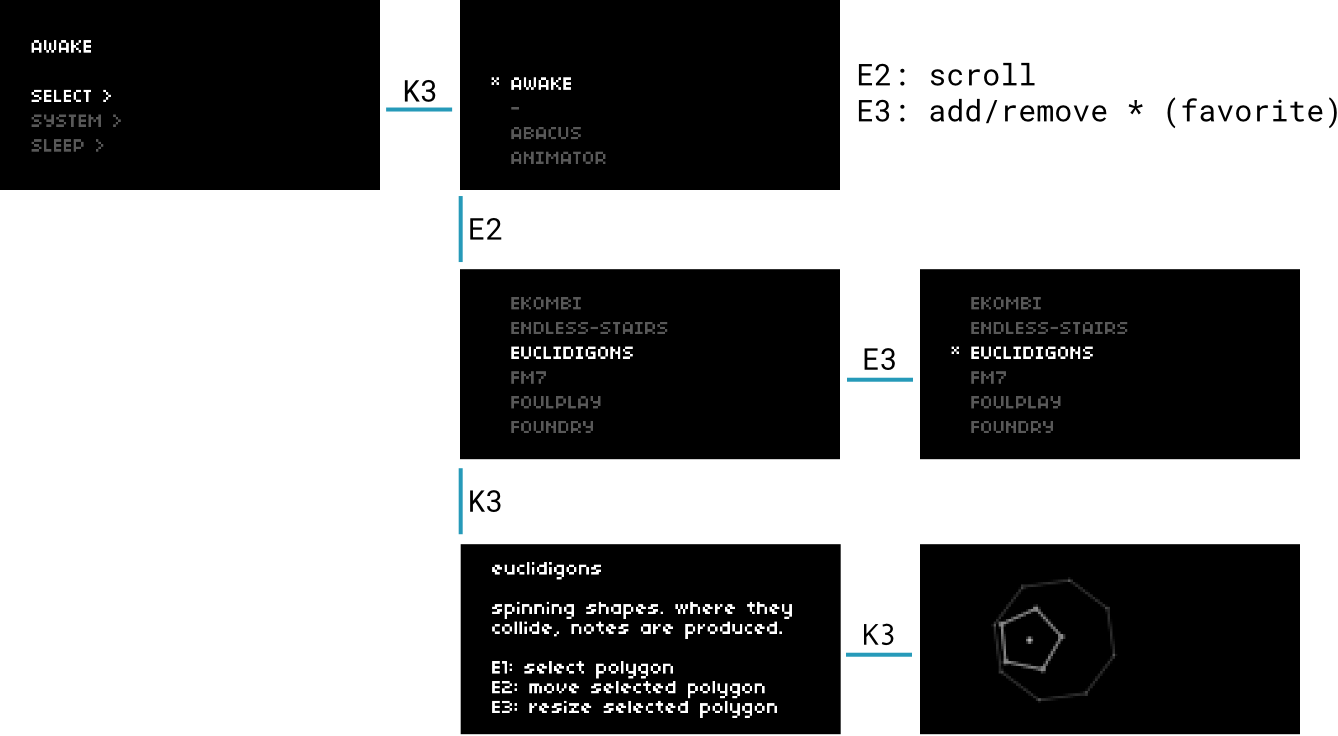 A fresh norns installation comes with two foundational scripts: awake, which we’ve covered earlier in these docs, and first light, a fantastic starting point for those curious about how norns scripts work from a code perspective. If you’d like to jump into any of the community scripts available for norns, be sure to connect to wifi and access maiden (the norns project manager)!

When you entered the SELECT menu, you might’ve noticed an asterisk next to awake – this signifies a favorite script, which places it at the top of the scroll. This makes it easy to quickly access your go-to’s!

To clear the script running on norns:

Many of the top-layer menus are also navigable with an attached USB keyboard. Current support is minimal, contributions welcome.

When the screen UI is on the menus interface:

Now that you know the basics of navigating the system, adjusting a script’s parameters, and recording the results, you might want to explore the community scripts available for norns.

But first, we’ll need to connect to WIFI in order to get norns up to date, transfer TAPE files, and download new community scripts. Please read on to wifi + files!