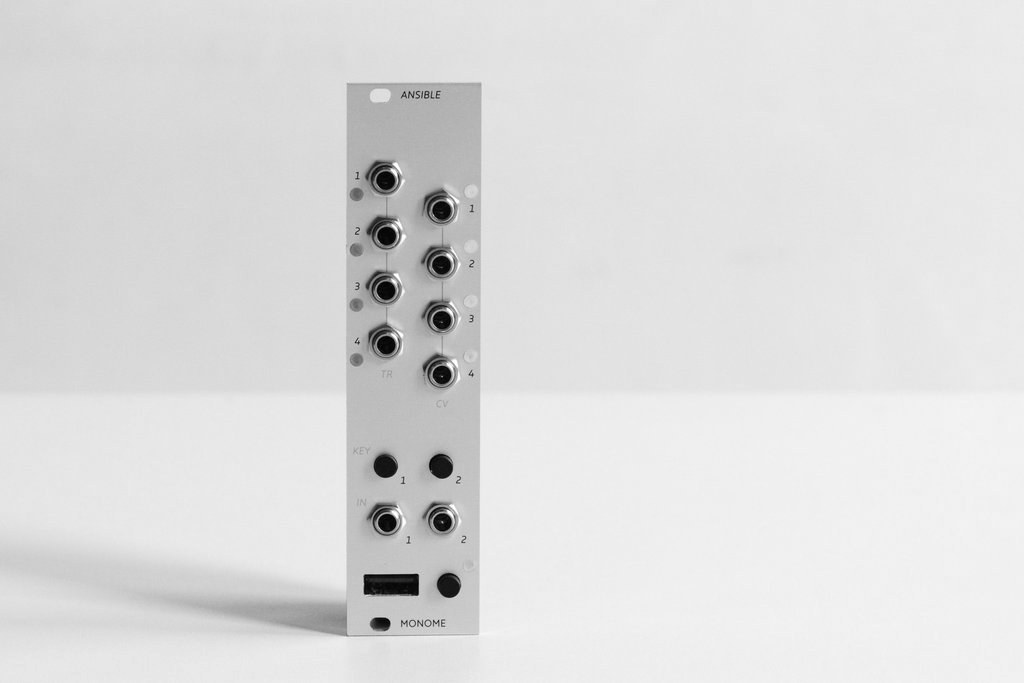 Align the 10-pin ribbon cable so the red stripe corresponds to the white indicator on the rear of the module’s circuit board. This is toward the lower edge of the module.

Be careful not to misalign the connector left-to-right either - while Ansible is protected against incorrect connection, doing so may damage other modules in your Eurorack case.

If you wish Ansible to communicate with Teletype you will need to attach the ii ribbon cable behind the panel. Be sure to align the red stripe on the cable with the white line on the board.

Secure the module with the two included screws.

These are maximums. Power consumption varies greatly based on which USB controller is attached and how many LEDs are being lit. You can drastically lower your +12V consumption by using a Switch (discontinued), Offworld (DIY), or some commercial adapter cables (see here) with your USB controller. 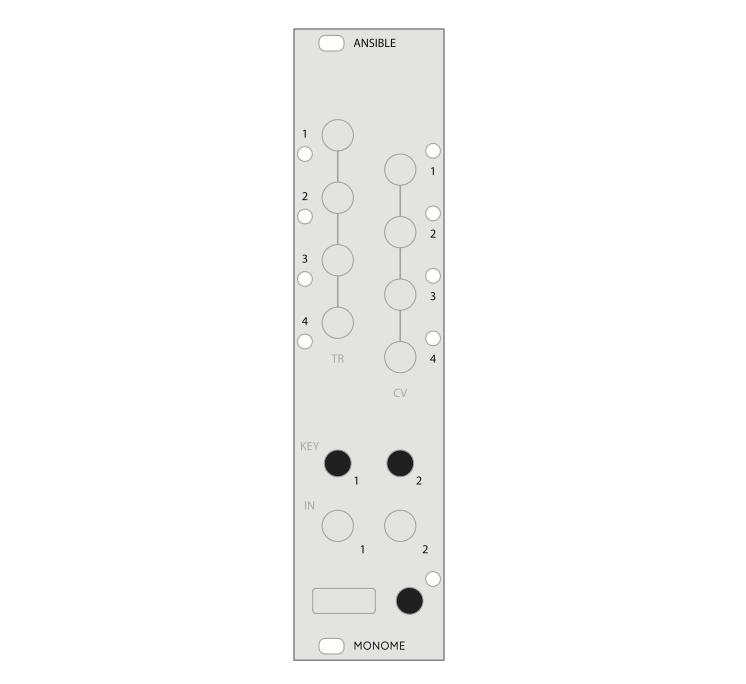 Ansible ships with a strange USB A-A cable. This is used for firmware updates. We expect to be adding features from time to time, and the Ansible is a good candidate for community hacking. It’s suggested to update your firmware to ensure you’re running the newest version– so the following documentation will be applicable rather than confusing.

Firmware update information instructions are available. Be warned that updating your firmware will erase all presets from the module’s internal storage! To preserve your work, you can back up Ansible’s presets to a USB disk and restore this file after reflashing the module’s firmware.

This documentation documents firmware version 3.0.0. Changelogs and binaries for previous releases can be found here. For versions 2.0.0 and up, you can determine the firmware version of your module by performing a USB disk backup. The created ansible-preset.json file will list the "version": at the beginning of the file.

Output and input functionality vary according to which application is running.

Applications are determined by which USB device is plugged in. For example, when you plug in a Grid after a firmware update, it will be running Kria. Hold the MODE key (next to the USB port) to switch to Meadowphysics; push it again to switch to Earthsea. Ansible will remember which application you were last running between power-ups. NOTE: USB hubs do not work with Ansible.

Unplugging the Grid and plugging an Arc will change to Levels.

With nothing plugged in the Ansible works as a Teletype input/output extender.

For more usage details, see the individual app pages linked above, or read about advanced settings.