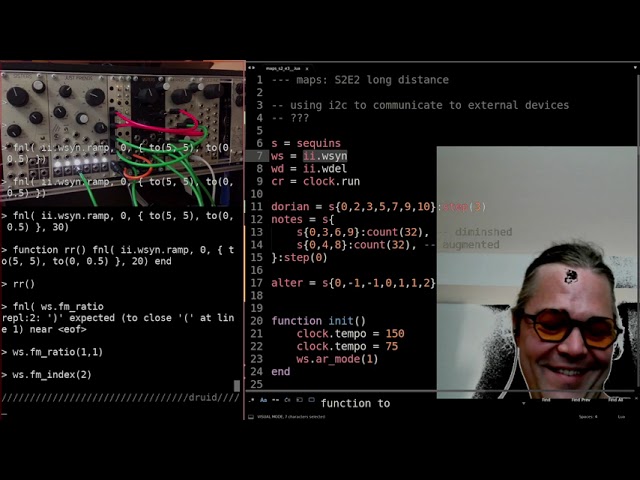 nb. descriptive hyperlinks connect to timestamped moments in the video above

where things get “musical”

this episode begins with a function-centric adaptation of ASL, a core feature of crow which was demonstrated in the previous episode. if this doesn’t sound familiar please feel free to hop back in time – the second half of the writeup is heavily focused on ASL (making shapes and onward).

crow 3.0 repackaged the norns clock system for tempo-synced execution of events. it’s super powerful + flexible, but there can be a bit of a rough onboarding if you’re unfamiliar with it.

essentially, there is a wall clock from which we can either sync events to occur (at different rates), or which we can sleep to delay the processing of an event. when we spawn a function that’s aware of the clock, we call it a “coroutine”. we can use both methods (sync and sleep) simultaneously, though the general approach is:

we can create a clock-synced coroutine on a single line of code. we’ll begin by aliasing the required clock.run as cr, then we’ll build a synced function (output 1 = v/8 from dorian scale):

basic anatomy of the cr function:

clock.sync is an important component of the coroutine – without it, crow will try to run an infinite number of events instantaneously, which will time out the CPU.

to start the educational part of the episode, Trent introduces fnl, a custom function which borrows the concept of ASL and applies it to function generation.

in the first example, Trent uses fnl to to increase the clock tempo from 120 to 480 over a period of 31.4 seconds:

basic anatomy of the fnl function

curious about the guts? here’s Trent’s overview and here’s the source code.

next, Trent walks us through addressing w/synth parameters using fnl and i2c:

this will affect the shape of the w/synth by adding 5V to the ramp parameter incrementally over 5 seconds, then back down to 0 in a half-second. Trent specifies 20fps, to help round out the voltage changes.

let’s assign it to a function which can be called more easily:

now we can just execute rr() in the repl to get our ‘rising ramp’ on command.

(the definition of mapcore expands)

this will affect the FM ratio by sliding it up to 11/1 over 11 seconds, then back down to 3/2 in 2 seconds. but there’s also some fun to be had in changing the frame rate of this fnl, for example:

…produces quite a different effect than the default 15fps!

to make it easier to pass the frame rate into the fnl, let’s assign it to a function which can accept frame rate as an argument:

now, we can execute rf(6) to generate our FM modulator at 6fps!

Trent navigates around the buffer.

fnl can be used to modulate functions which require more than one argument by nesting the target function inside of another function with the single argument we wish to funnel.

eg. if we wanted to advance a tiny playback window through a frozen delay line:

this is a bit of a mouthful, but essentially:

formatted as a single line for easy execution in druid:

after Trent uses this mechanism to modulate the loop window while recording, they open up the loop length to reveal the collage and execute a gorgeous performance.

focusing on the destination

fnl / funnels allow the performer to define an end-point and describe the journey without needing to manually execute the journey themselves. this is why funnels are described as ‘a slope language for functions’ – not just LFOs which automate a looping gesture, but a realtime automation brewed up in the moment to arrive at a desired future.

rather than “holding a knob and turning it down very slowly”, try using a funnel!