Processing is a programming language, development environment, and online community. Initially created to serve as a software sketchbook and to teach computer programming fundamentals within a visual context, Processing has evolved into a development tool for multi-media performance, including interaction with hardware devices and libraries for sound manipulation. Highly accessible and with a wealth of tutorial information, Processing is a great choice for coding with the monome grid and is fully cross-platform making it highly useful when sharing projects.

If you’re very new to Processing (or Java), it will be very beneficial to work through the ‘getting started’ tutorial available directly from Processing.org: processing.org/tutorials

For example, proper installation of oscP5 on the Mac would look like:

You’ll need to restart Processing if it’s running while you installed these libraries.

The monome-processing library facilitates easy connection and communication with grids. Connect to a grid with the following code:

Here the first monome device found is attached. If you want to connect to a specific grid (if you have more than one connected) you can specify a serial number, which can be found using serialosc-monitor.

The library communicates with serialosc to discover attached devices using OSC. For a detailed description of how the mechanism and protocol work, see monome.org/docs/tech:osc.

See grid_studies_2.pde for this section. 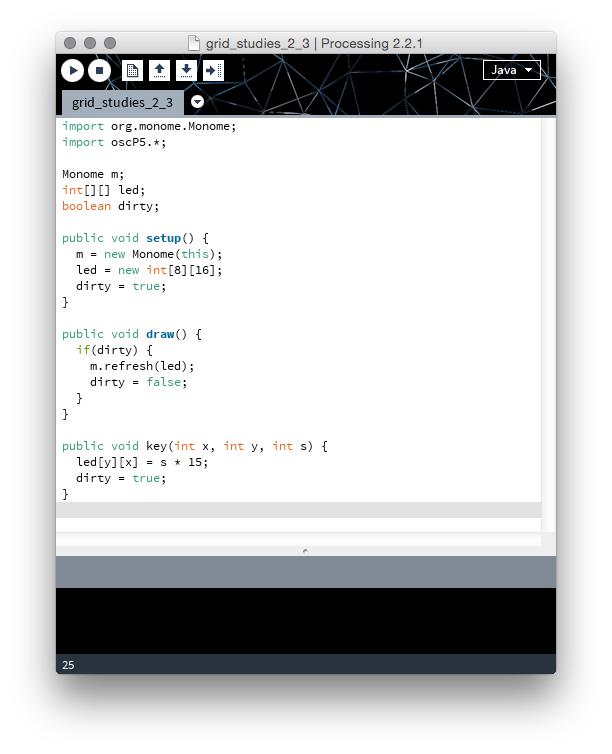 The monome library calls the function key() upon receiving input from the grid. It has three parameters.

Below we define the key function and simply print out incoming data.

We will, of course, do more interesting things with this function in the future.

Use the m.refresh() function to update the state of the LEDs on the grid. This function accepts an array which represents the entire grid, hence the full frame is updated on each call.

This array has 8 rows of 16 columns. On initialization this array is cleared (all elements set to 0). Each LED on the grid can have a brightness range of 0-15, where 0 is off and 15 is maximum brightness.

We can draw a small pattern by setting individual elements of the array:

And finally, to copy this entire array to the grid:

As seen in grid_studies_2.pde we place this code inside the draw() function. Upon running the sketch you will see this: 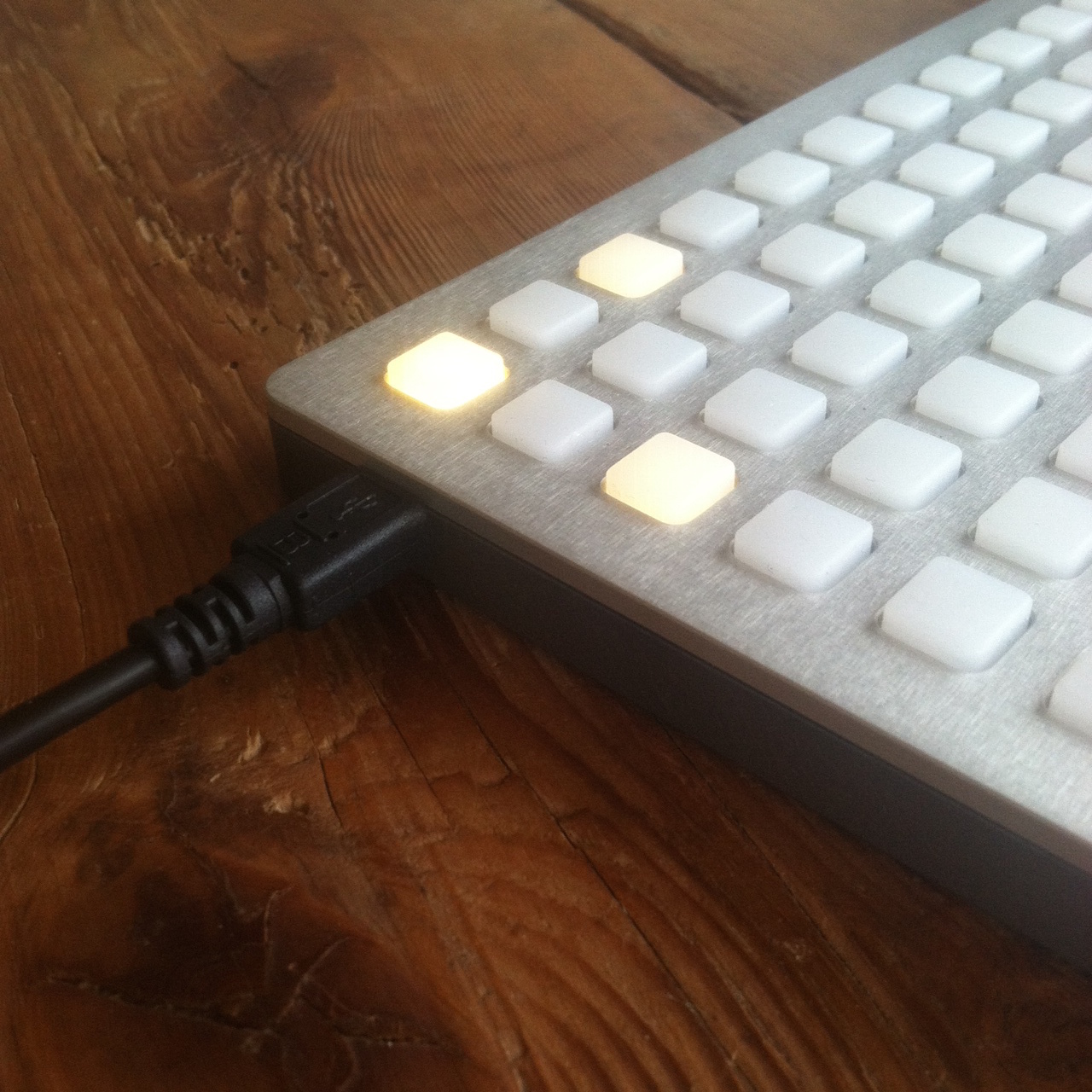 See grid_studies_2_3.pde for this section.

The previous code refreshes the grid constantly with every call of draw(), which we typically do not want to do– it doesn’t make sense to have the computer spend time redrawing the same thing constantly.

Next we’ll change the LED state to show which keys are being held, and only redraw when something has changed. 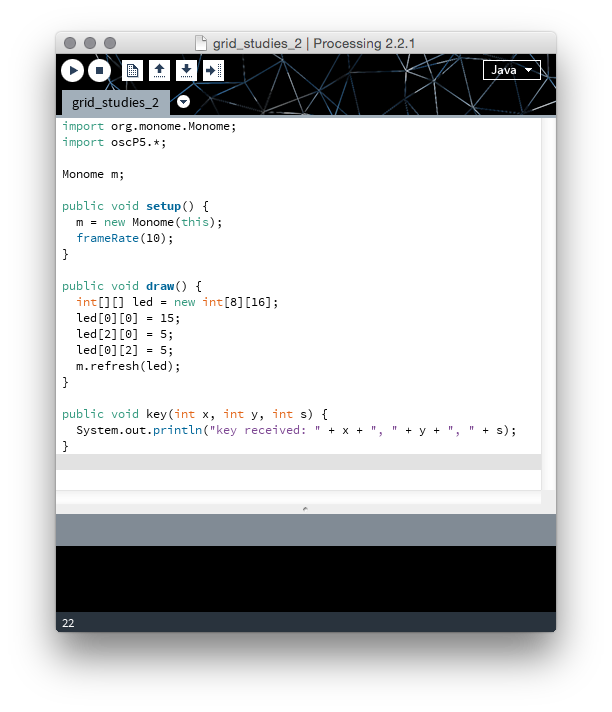 First, we move the led array to the top, so that it is global. This way we can change the array from inside the key() function. We have to allocate the array inside of setup().

We add a boolean variable dirty to indicate if the grid needs to be refreshed. We set this to true within setup() so the grid is immediately cleared upon start.

Now we change the grid display upon incoming key data:

Since s is either 0 or 1, when we multiply it by 15 we get off or full brightness. We set the LED location according to the position of the incoming key press, x and y.

We changed the led array, so we specify that the grid need refreshing:

Once this flag is set, the grid will be updated on the next iteration of draw():

Once we’ve refreshed the grid, we set the dirty flag to false so we’re not needlessly refreshing.

The draw() function is called at 60fps unless you specify a different rate in setup() such as frameRate(10);.

The most basic decoupled interaction is a toggle. Turn the grid into a huge bank of toggles simply by changing line 21 (which is in the key function):

Now only key downs (s = 1) do something. They use an xor operator to toggle the LED value between 0 and 15, depending on the previous state of the LED.

See grid_studies_3_1.pde for this step.

First we’ll create a new array called step that can hold 6 rows worth of step data. On key input we’ll look for key-down events in the top six rows:

If this condition is true, we toggle the corresponding position in the step data and set the dirty flag so the grid will refresh.

We will “build” the LED display from scratch each time we need to refresh. This will be done inside of draw() so we no longer need the led array to be global. Below we simply copy the step data to the led array, doing the proper multiplication by 15 in order to get full brightness.

That’ll get us started.

See grid_studies_3_2.pde for this step.

For simplicity we’re going to make a not-very-smart timer to drive our sequencer. Basically we’ll count draw() cycles and upon matching a specified interval, we’ll take a step forward in the sequence.

In draw() we check timer against STEP_TIME. If they are equal, we process the next step, which in this case simply means incrementing play_position, which must be wrapped to 0 if it’s at the end. We reset timer so it can count back up, and set the dirty flag so the grid redraws.

You can change the speed by altering STEP_TIME.

For the redraw we add highlighting for the play position. Note how the multiply by 15 has been decreased to 11 to provide another mid-level brightness. We now have a series of brightness levels helping to indicate playback, lit keys, and currently active keys:

During this loop which copies steps to the grid, we check if we’re updating a column that is the play position. If so, we increase the highlight value. By adding this value during the copy we’ll get a nice effect of an overlaid translucent bar.

See grid_studies_3_3.pde for this step.

When the playhead advances to a new row we want something to happen which corresponds to the toggled-on rows. We’ll do two things: we’ll show separate visual feedback on the grid in the second-to-last (trigger) row, and we’ll call a draw something to the computer screen.

Drawing the trigger row happens entirely in the draw():

First we create a dim row (level 4 is fairly dim). Then we search through the step array at the current play position, showing a bright indicator for each on state. This displays a sort of horizontal correlation of rows (or “channels”) 1-6 current state.

For the screen drawing, we create a function trigger() which gets passed values of activated steps. This is what we do, inside draw() right after we change `play_position’:

And then trigger() itself:

It’s just drawing some lines. Some code is added throughout the file to set up drawing and gently fade everything on each redraw.

See grid_studies_3_4.pde for this step.

We will now use the bottom row to dynamically cut the playback position. First let’s add a position display to the last row, which will be inside draw():

Now we look for key presses in the last row, in the key function:

We’ve added two variables, cutting and next_position. Check out the changed code where we check the timer:

Now, when pressing keys on the bottom row it will cue the next position to be played. Note that we set cutting = false after each cycle so that each press only affects the timer once.

Lastly, we’ll implement setting the loop start and end points with a two-press gesture: pressing and holding the start point, and pressing an end point while still holding the first key. We’ll need to add a variable to count keys held, one to track the last key pressed, and variables to store the loop positions.

Setup the default loop length to begin with the full range:

We count keys held on the bottom row thusly:

We’ll then use the keys_held counter to do different actions:

We then modify the position change code:

Processing was designed by Ben Fry and Casey Reas and is maintained by the Processing Foundation.

monome-processing was written by and is maintained by Tom Dinchak.