Max is a full kit of creative tools for sound, graphics, music and interactivity in a visual environment. Patching together objects the user can create complex interactions between software and hardware devices. The rapid and immediate nature of graphical programming lends itself well to developing for grids, making it the longtime tool of choice for monome grid-based software.

This tutorial will show the basics of interfacing with the grid including how a simple, yet immediate sequencer platform can be made with a small amount of code.

This lesson assumes a basic understanding of the Max patching interface. If you’re absolutely new to Max it may be helpful to first go through some of the most excellent Max tutorials in-app Help > Max Documentation.

See grid-studies-1-1.maxpat for this section.

Create a new object (press N) and type bpatcher serialosc and then hit enter. A bpatcher window will appear, resize this to match the long rectangle. Plug in your grid and it will appear in the serialosc box. If you connect more than one grid, you can choose which device to communicate with via the dropdown.

Note: this box you’ve embedded isn’t serialosc itself, which is an invisible daemon on your computer. This box is a helper patcher to simplify using serialosc. We’ll refer to this helper as serialosc, hopefully without much confusion.

See grid-studies-2-1.maxpat for this section.

To see what is coming from the grid, create a print object and connect the left outlet of serialosc to it. Open the max console (Window -> Max Console) and press some keys on the grid. OSC data will be displayed on the console.

Change the print object to route /monome/grid/key and then see the output from the route.

Connect the output of the route to this matrixctrl for a graphical display of the grid’s key state. Above the serialosc box create a message (push M) and type:

Using Max’s list methods, use $1 $2 $3 to change LEDs more dynamically. With a single message box as a sort of funnel, we can change various positions with message boxes, toggles, and a matrixctrl. The most fundamental decoupled interface is an array of toggles. We can accomplish this easily by ignoring the key up state, switching the LED state only on key down.

Remove the connection to the LED-driving matrixctrl. We can filter out key-up messages by re-arranging the order of the key output, using a route object:

By moving the key state (z, here as $3) to the front, the route object will only pass messages where this first number is equal to 1. What comes out of route is just x and y. We can use this to toggle a matrixctrl by adding inc to the end of the message thusly:

Connect this to the input of the matrixctrl and we have a toggle bank. See grid-studies-3-1.maxpat for this step.

This works identically to our previous “decoupled interaction” example, but we want to only use the first six rows. So we sort them out inside the /p keys/ subpatcher:

By switching the first and second elements and then putting them into the route object, rows 0-5 are passed to the right outlet. We’ll then pass key-down messages only to the matrix toggling. 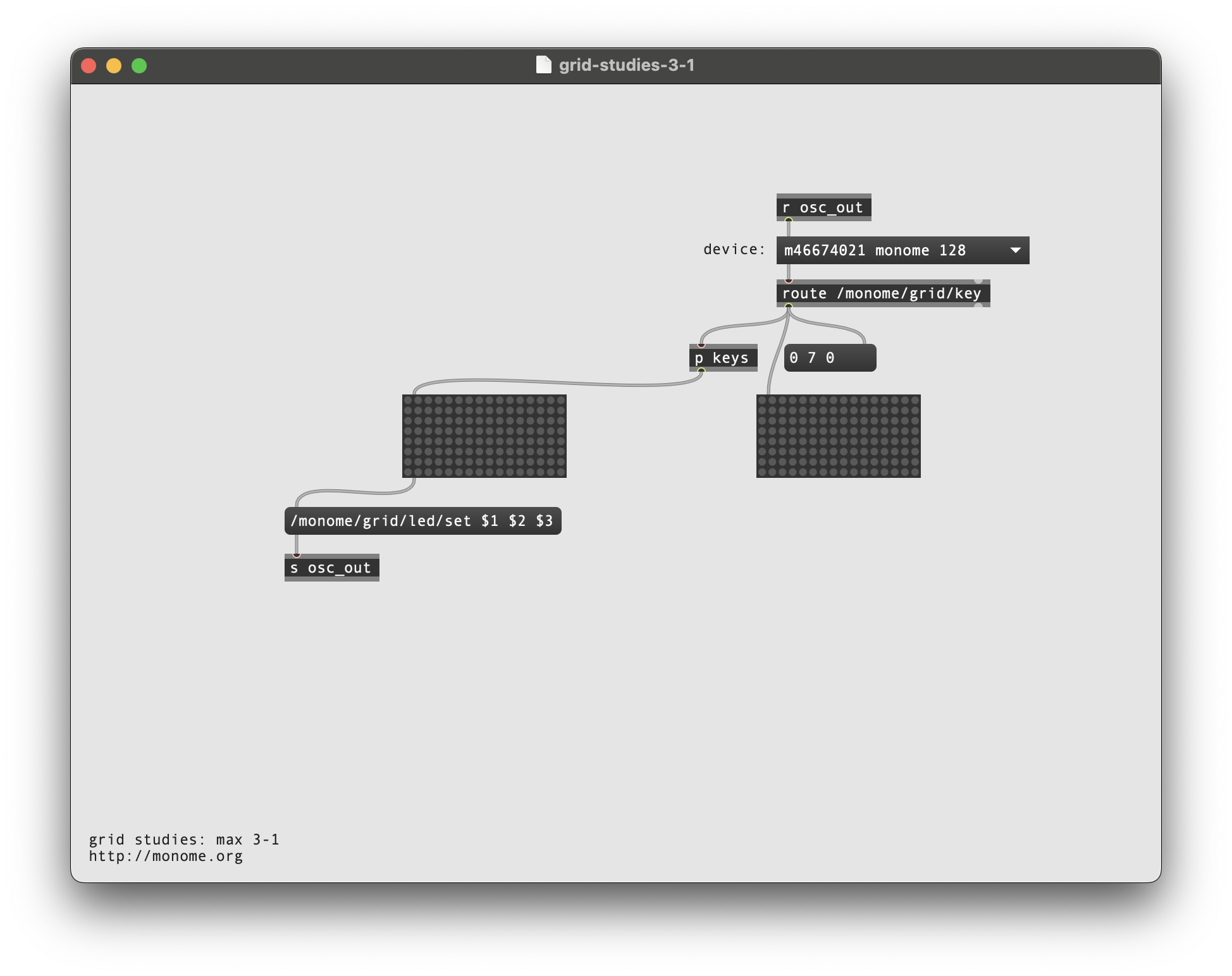 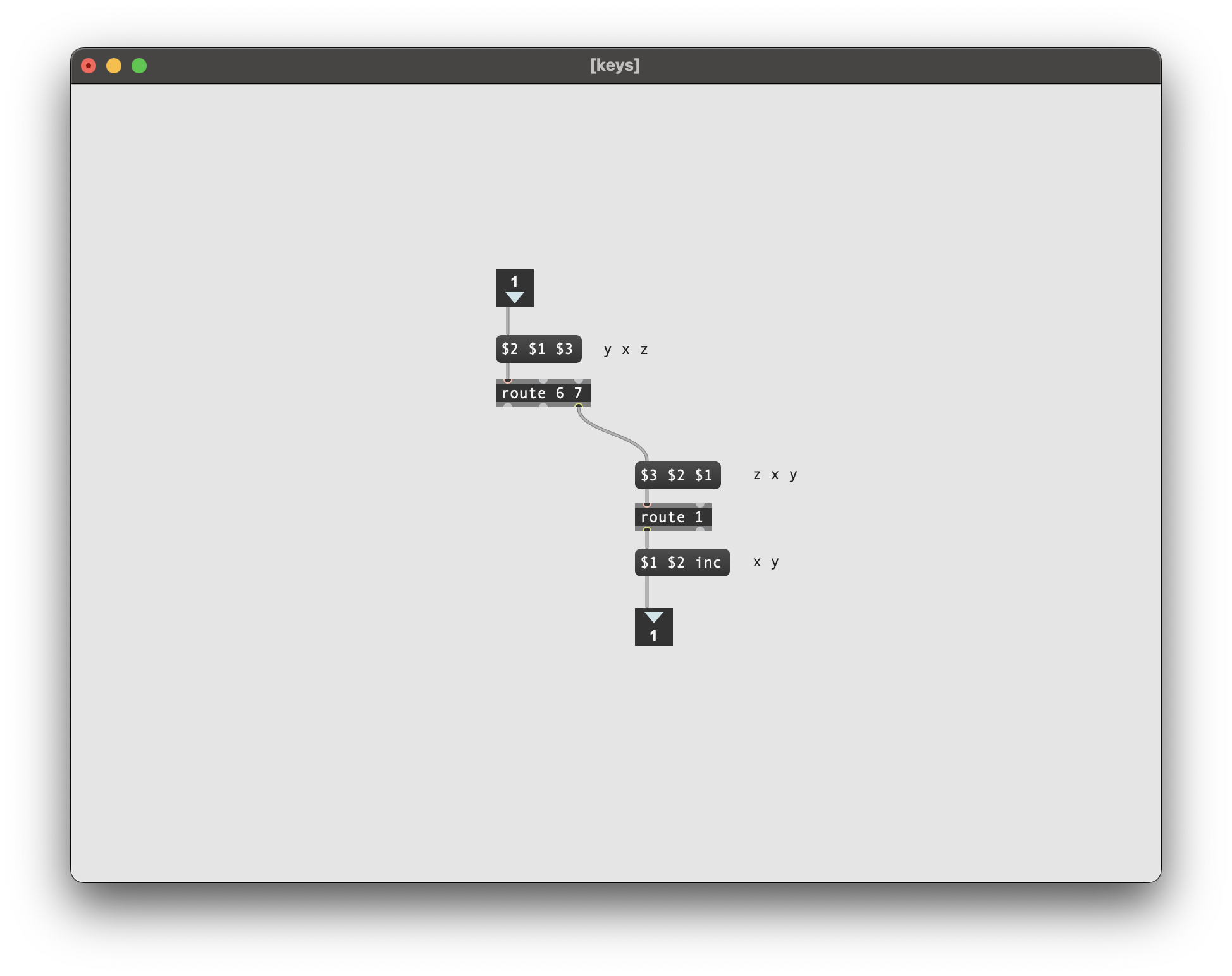 See grid-studies-3-2.maxpat for this step. 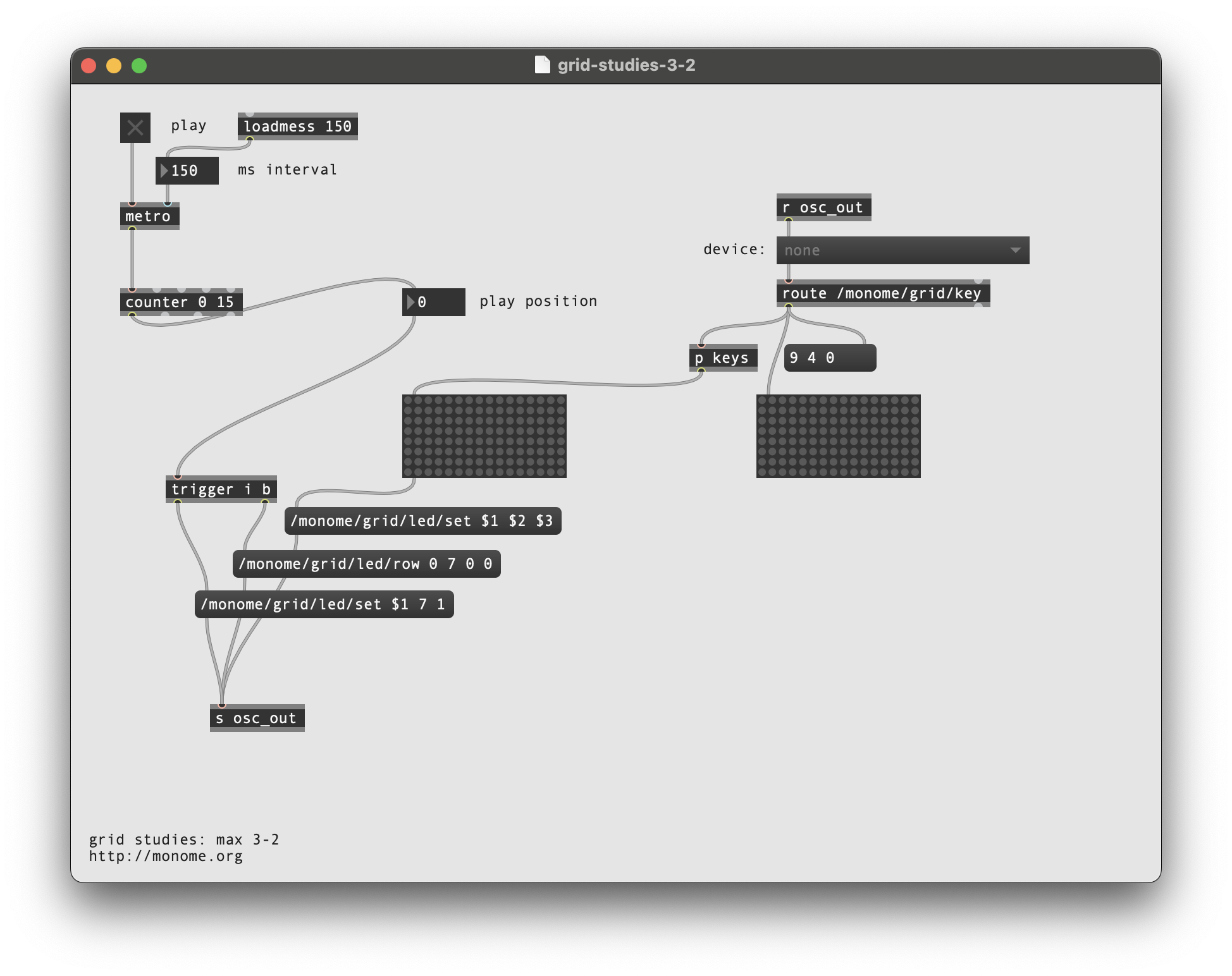 See grid-studies-3-3.maxpat for this step.

We do this by connecting a getcolumn $1 to the toggle matrix, driven by the play position. The matrix will output a list of 0/1 values which indicate the toggle states from top to bottom. We can “extract” only the 1’s (on-states) using a zl sub 1 object. However, these values are indexed from 1, and we need them indexed from 0 (because this is how the grid indexes its LEDs) so we subtract one.

To indicate an “event” we will light up the corresponding x position in the 6th row: 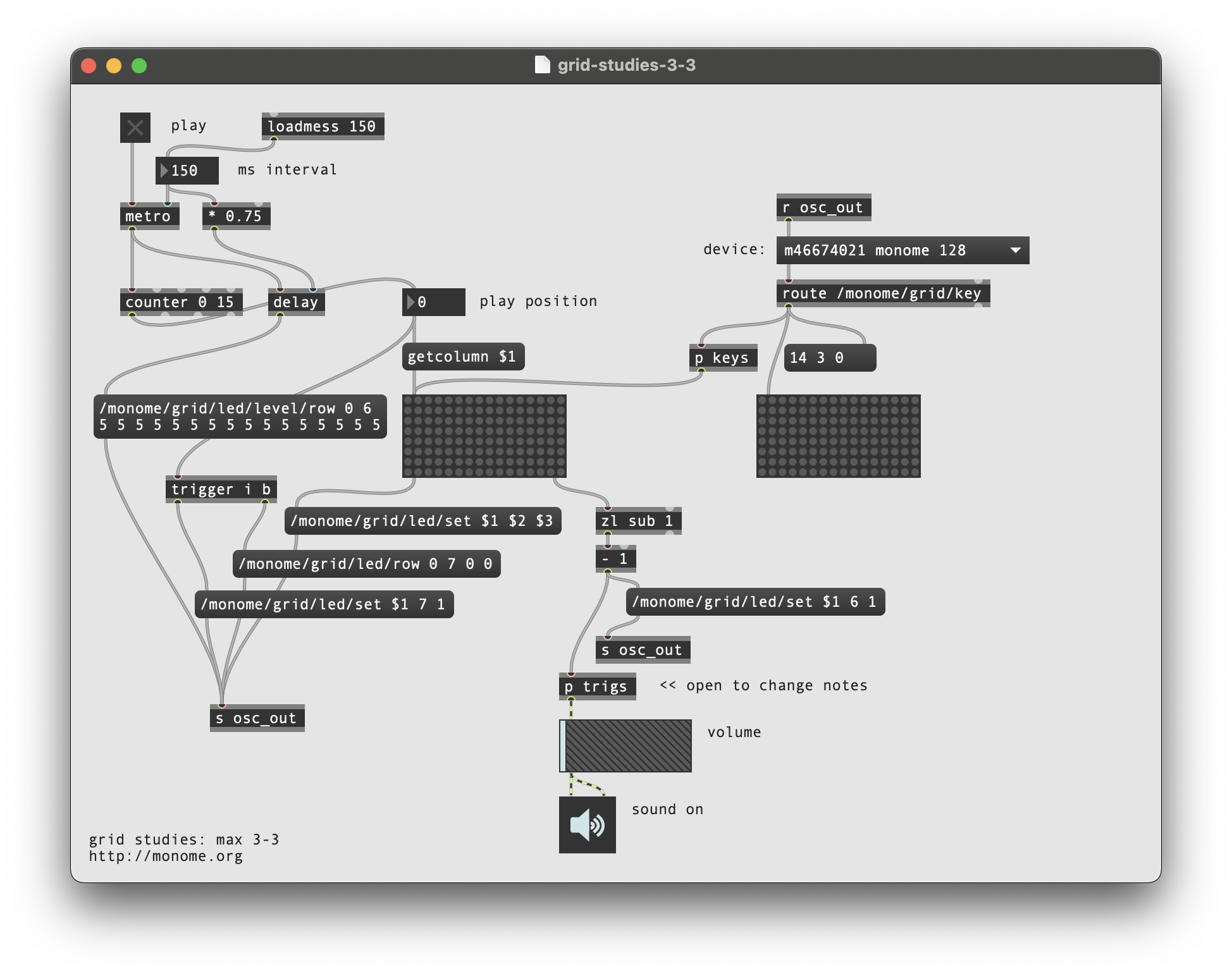 Similarly to the play position display, we need to clear the row between refreshes. But since more than one event can be displayed per step, we’ll want to clear only once per group of triggers. We can accomplish the desired visual effect by clearing the row a delayed time after the events arrive.

Lastly, there’s a tiny sound engine so you can actually hear something. Turn on the DAC and turn up the gain slider. Change the note values by opening up the p trigs subpatcher.

See grid-studies-3-4.maxpat for this step.

First we add the r counter receive object above the counter. Then the rest of the patching happens inside the p key subpatcher. 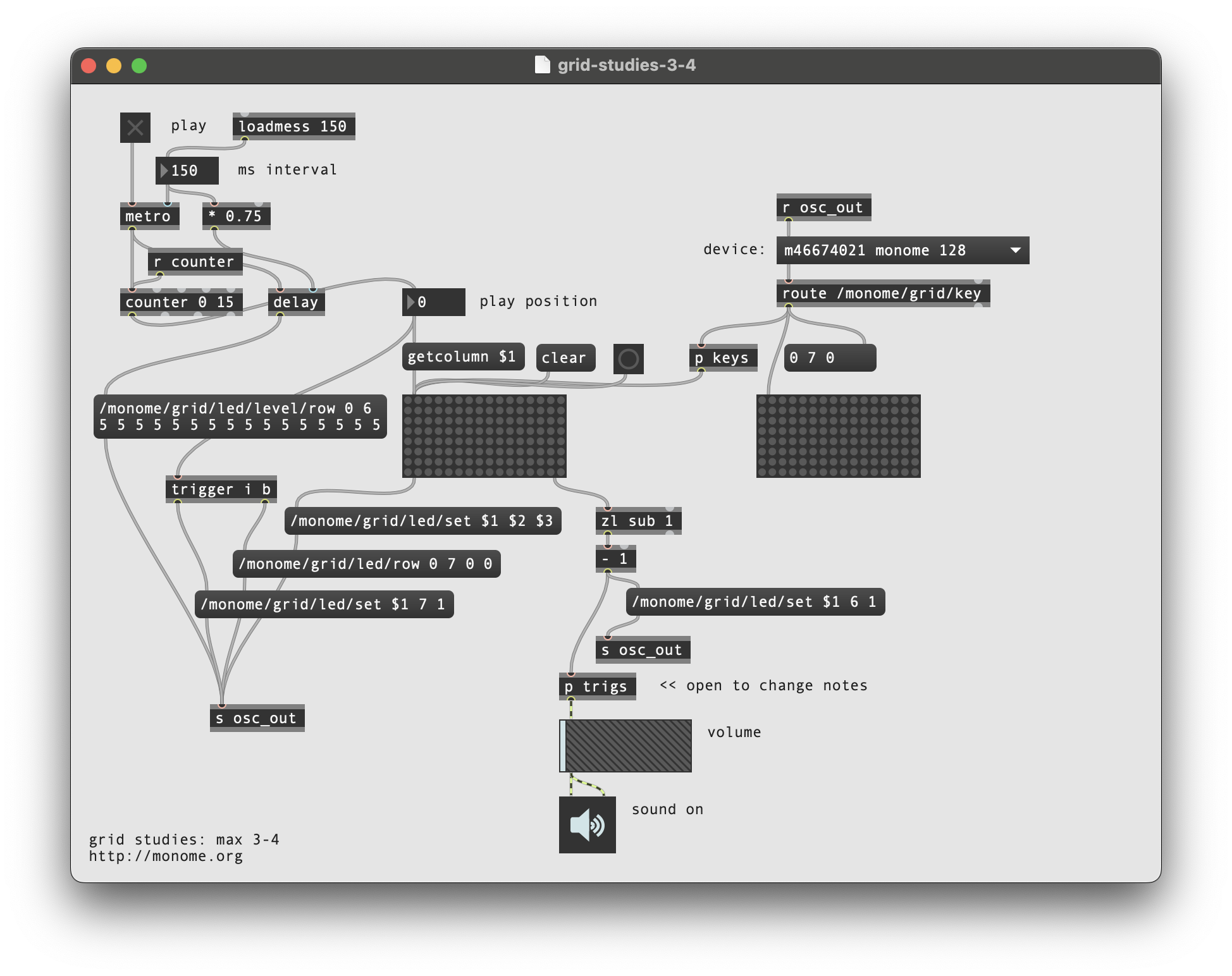 We unpack the incoming message and keep track of the accumulation of key ups and downs. This is accomplished by adding one for each key up and subtracting one for each key down. This looks weird as a Max patch, but tracing through it will reveal the logic.

See grid-studies-3-5.maxpat for a js implementation of this patch.

Max was originally designed by Miller Puckette and is actively developed by Cycling ‘74.