Pure Data (Pd) is a visual programming language developed by Miller Puckette in the 1990s for creating interactive computer music and multimedia works. While Puckette is the main author of the program, Pd is an open source project with a large developer base working on new extensions. (from Wikipedia).

If you’re new to Pd, spend a few moments with these introductory tutorials from Johannes Kriedler: Programming Electronic Music in Pd

See grid-studies-1-1.pd for this section.

Save the blank patch to the /files folder as study.pd.

Create a new object (win/linux: control+1, mac: command+1) and type serialosc then place it in your patch with a mouse click. 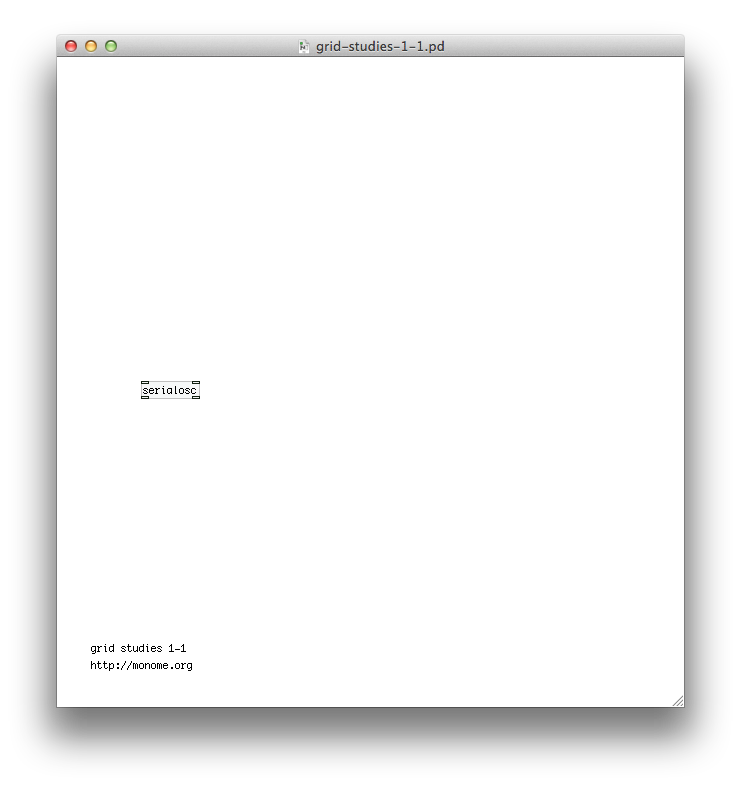 Attach your grid and you can now communicate with it through this object.

Note: this object you’ve embedded isn’t serialosc itself, which is an invisible daemon on your computer. The object is a helper patcher, or ‘abstraction’ to simplify using serialosc. We’ll refer to this helper as serialosc, hopefully without much confusion.

The serialosc abstraction is actually the patch serialosc.pd inside an object. In order for your patch to use serialosc, the abstraction needs to be in the same folder as your saved patch, which explains why we saved our patch to /files above.

See grid-studies-2-1.pd for this section.

To see what is coming from the grid, create a print object and connect the left outlet of serialosc to it. Open the Pd window (Window -> Pd Window) and press some keys on the grid. OSC data will be displayed in the console. 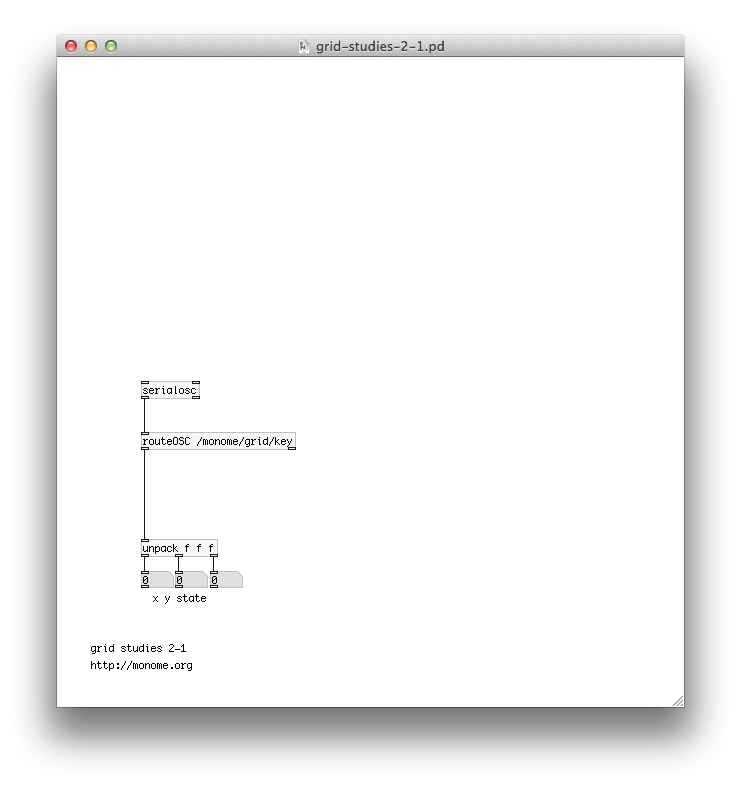 Above the serialosc box create a message box (control/command + 2) and type:

Using Pd’s list methods, use $1 $2 $3 to change LEDs more dynamically. With a single message box as a sort of funnel, we can change various positions with message boxes and toggles. 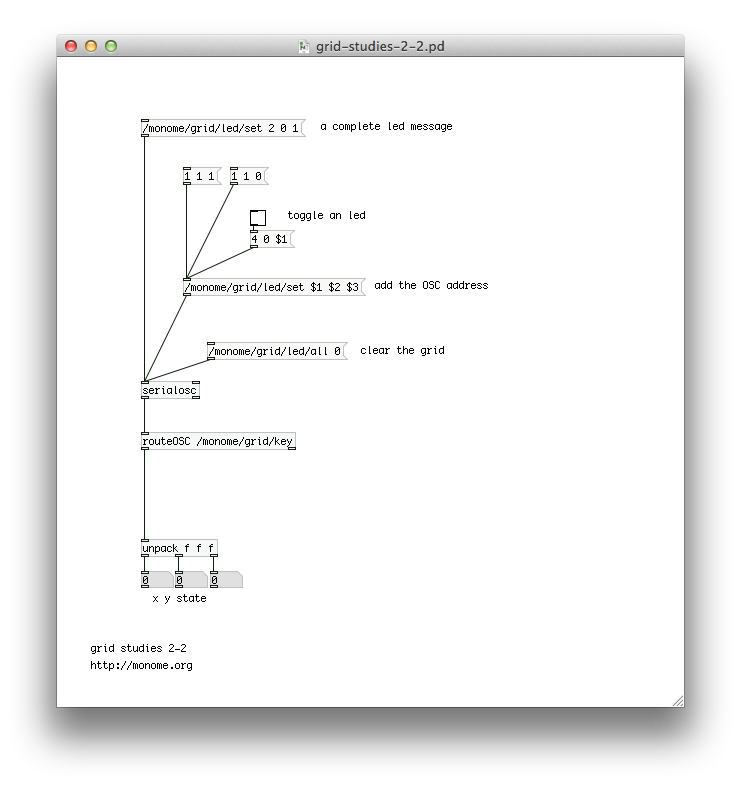 to the /monome/grid/led/set $1 $2 $3 message box above serialosc which changes LEDs. 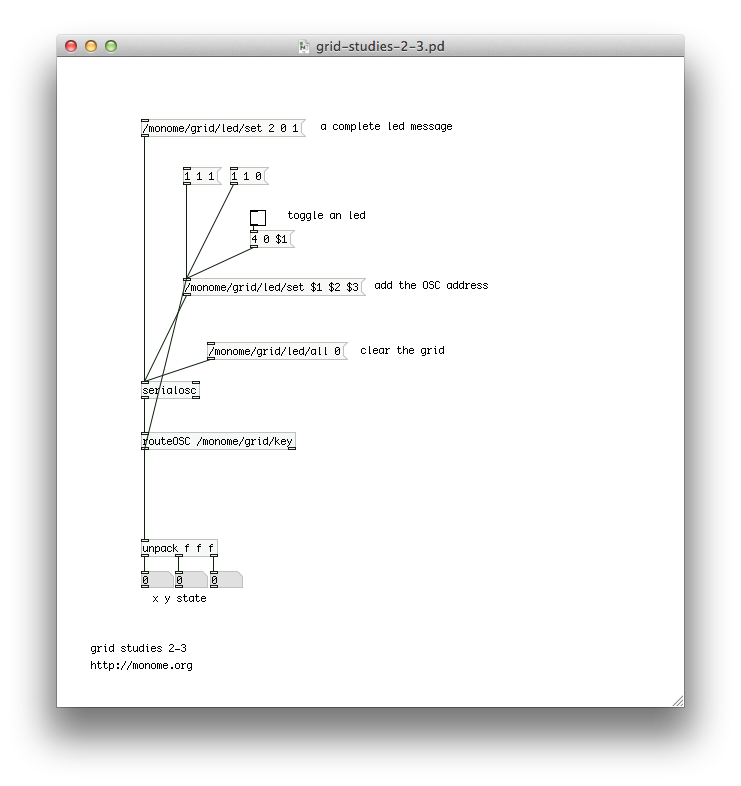 The most fundamental decoupled interface is an array of toggles. We can accomplish this by ignoring the key up state, switching the LED state only on key down.

We’ll start with a single toggle for the upper left key position (0, 0).

Remove the connection between routeOSC and the LED-driving message box.

To respond to the 0,0 position, we can use two route objects to filter the x, then y location of the press. Then we can respond only to key down by looking for values of 1 with a sel object.

Connect the output from the sel into a toggle box (control/command + shift + T). You can now see the toggle reflect the toggle state by pressing the upper-left key on the grid.

To complete the cycle we can then drive the corresponding LED with a message box /monome/grid/led/set 0 0 $1 connected to serialosc’s left inlet. 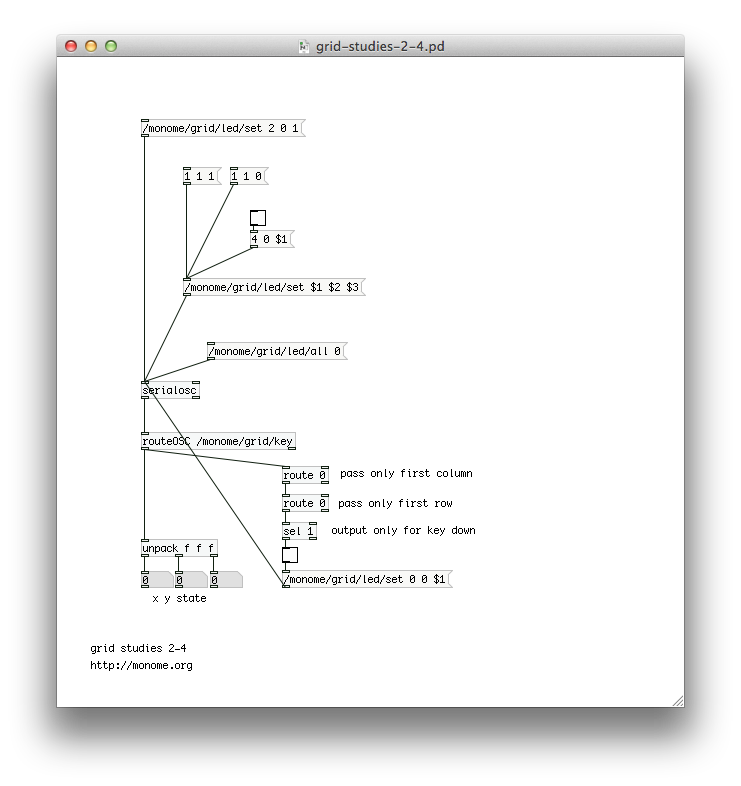 See grid-studies-3-1.pd for this step.

Before we can make our bank of toggles, we need a way to look at the top six rows only, as the last two rows are not part of our toggle bank. First we’ll use a message box to switch around our key input to place the row number first, then route off the last two rows for use later.

By switching the first and second elements and then putting them into the route object, rows 0-5 are passed to the right outlet.

In our previous example we only created a single toggle, and the chosen approach is not appropriate for dealing with a large bank of toggles. Instead we’ll create a table which functions as a large array of data for remembering the toggle states of the top six rows. Our table is inside the subpatcher pd toggles.

Note how after formatting the LED messages from pd toggles we use a s osc-out to send osc messages to serialosc without cluttering our patch with long connections. 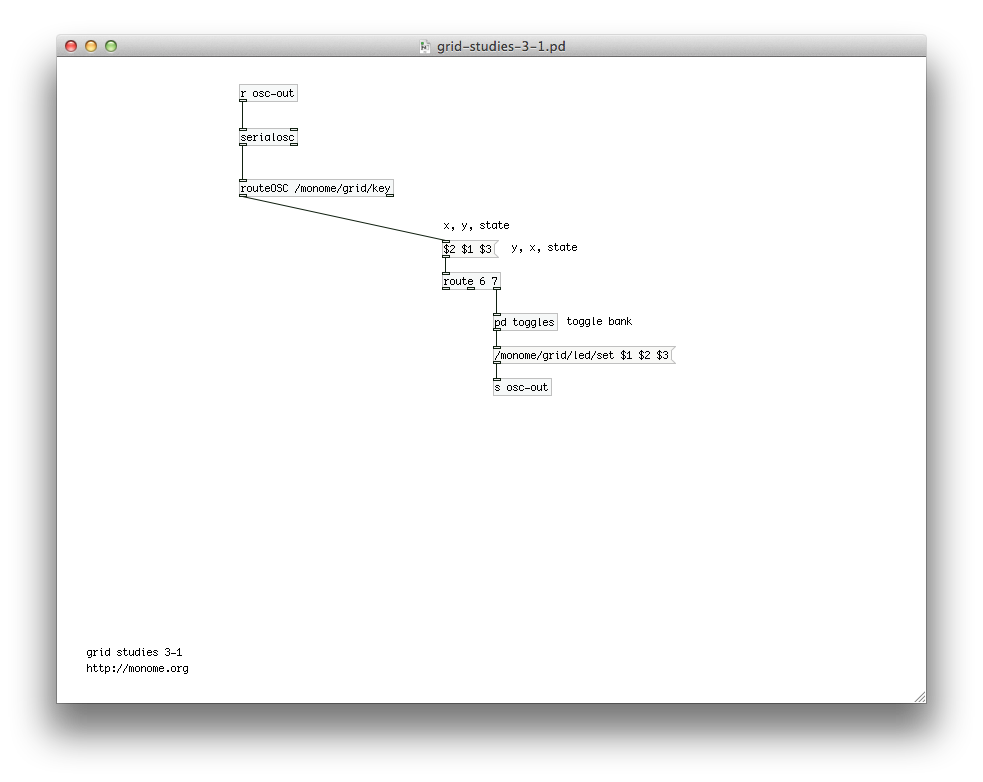 The toggles sub-patch can be broken down into a number of small steps to understand it, though don’t fret if it doesn’t make sense immediately. This sub-patch can simply be copied to your own projects without modification and it will work for up to the full 16x8 grid. 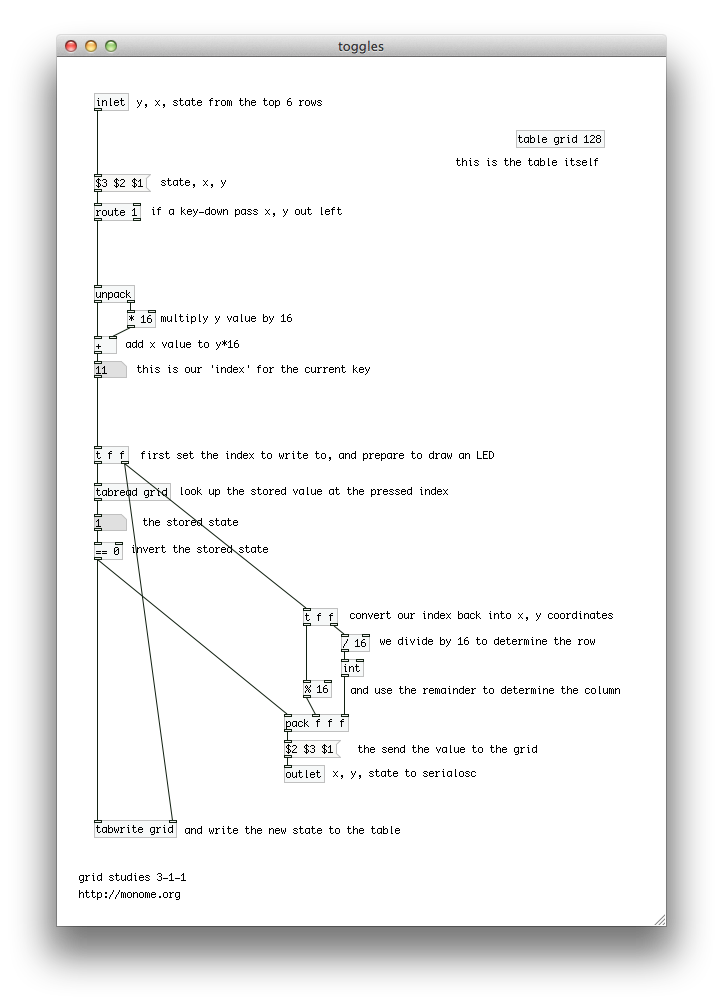 In order to save the state of the bank of toggles we create a table called ‘grid’ with 128 values.

Rearranging the input key press information we can ignore key-ups as before. Inline comments track the current order of our input message.

In order to put our 2-dimensional grid into a table, we have to ‘flatten’ it into a long list. We do so by multiplying the y value by 16, and adding the result to our x value. The grid is thus read like a book, from left to right, starting at the top and working downward.

This index value is then used to set two values before toggling that state. The index is converted back to the x,y coordinate for LED feedback, plus we save the index to update the table with our new toggle state.

Finally we use the index to find the current state of the table, then invert that state with ‘== 0’. This works because our state is always a 0 or 1. This value is then sent to update the grid LED and is stored back in the table.

See grid-studies-3-2.pd for this step. 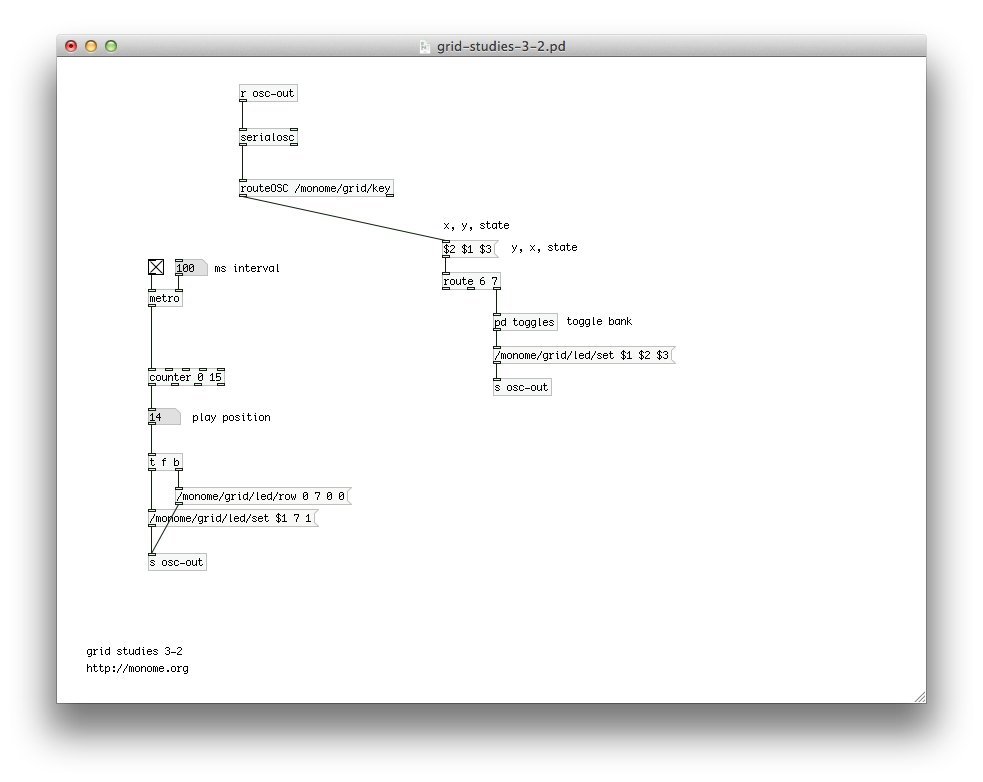 See grid-studies-3-3.pd for this step.

We do this by scanning through our table, looking at every 16th value, driven by the play position. The pd triggers sub patch shows how to read data out of the table we created in pd toggles. 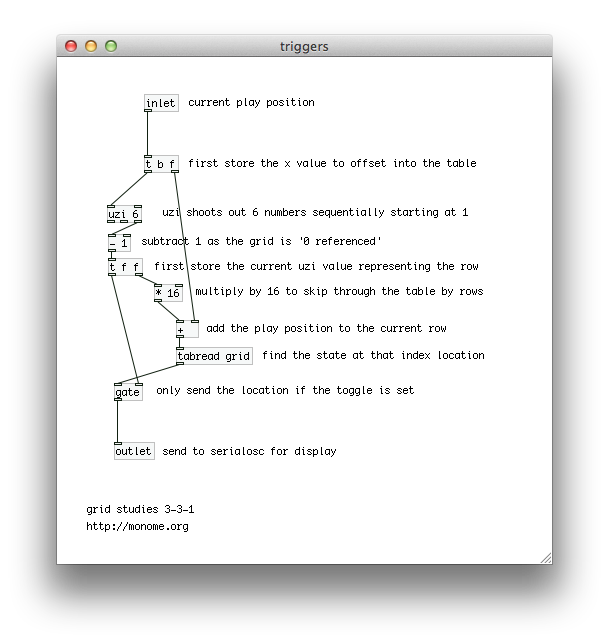 Using the uzi object we read the state of the toggle for each subsequent row, by multiplying the uzi output by 16 (to jump through the array by rows), and adding the current play position to point at the correct column of data. Note that we subtract one from uzi’s right outlet as the grid is indexed from zero, whereas uzi starts counting from one. If the discovered value is 1 we send out the row value to indicate an “event” has occured.

To indicate these “events” we will light up the corresponding x position in the second to last row:

Similarly to the play position display, we need to clear the row between refreshes. 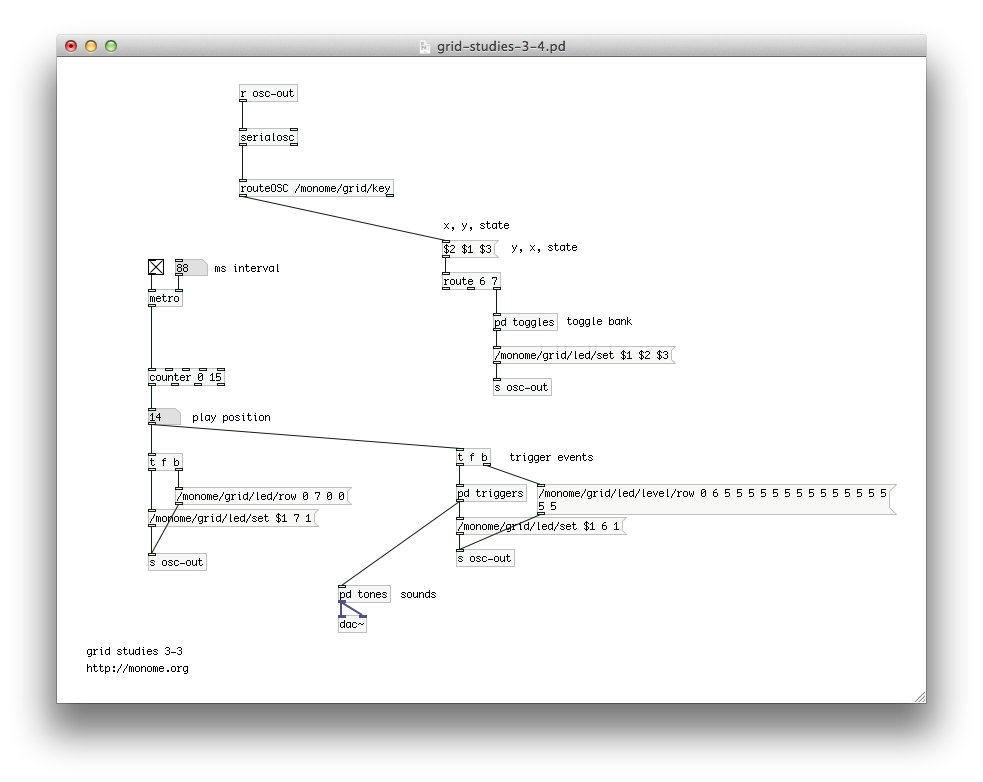 There’s a tiny sound engine so you can actually hear something. Turn on the DAC and turn up the gain slider.

See grid-studies-3-4.pd for this step.

Inside pd cutting we process all presses from the last row, and send our commands to the counter object. 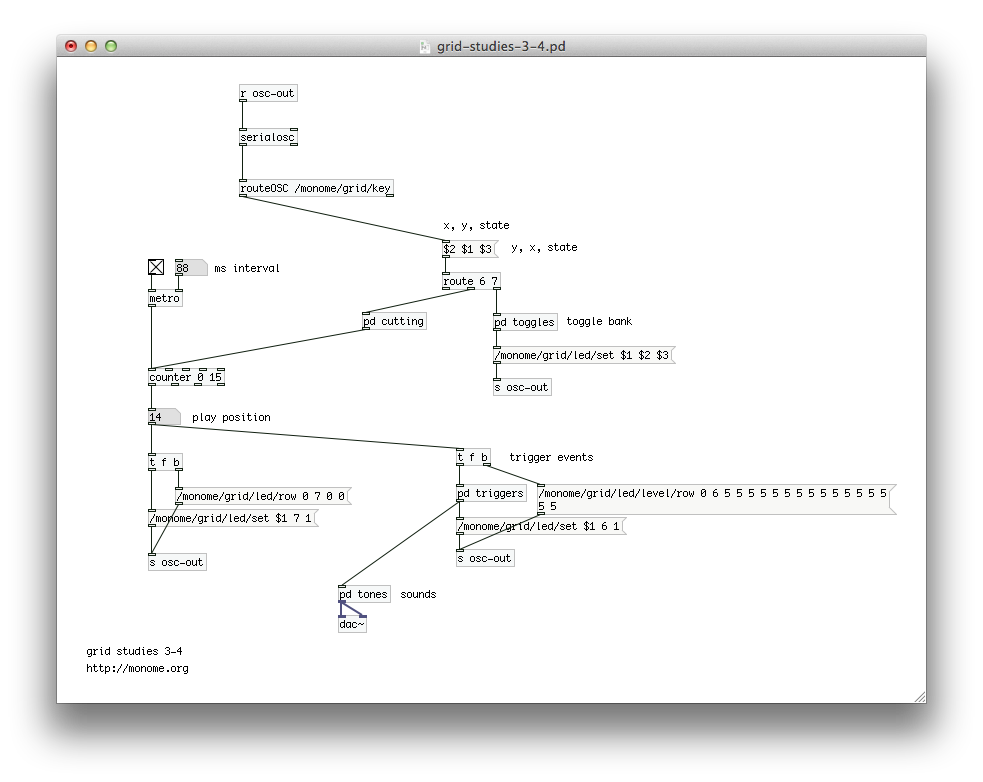 Unpack the incoming message and keep track of the accumulation of key ups and downs. This is accomplished by adding one for each key up and subtracting one for each key down. This looks weird as a pd patch, but tracing through it will reveal the logic. 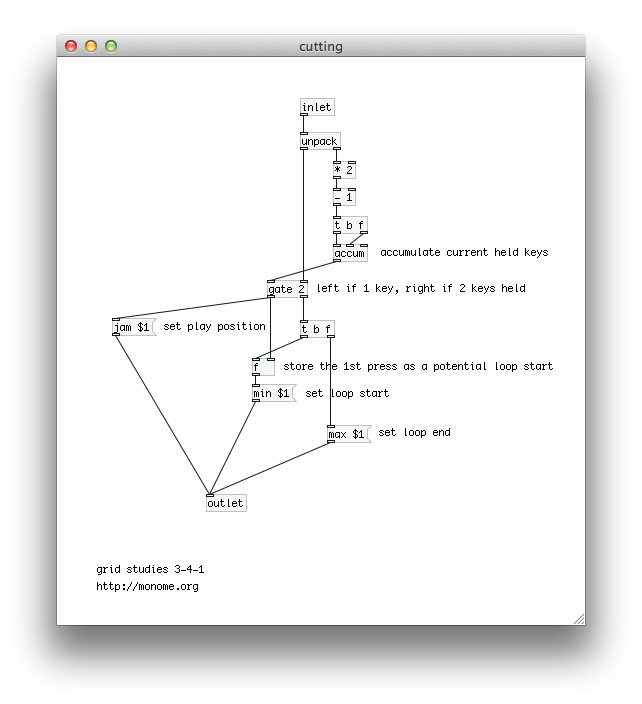 Max was designed by Miller Puckette and is actively developed as an open source project. puredata.info.

This tutorial was created by Trent Gill for monome.org.